Oyster farming is the cultivation of oysters. It is done in a saltwater environment, through different phases, from the ocean to the Atlantic marshes, before ending up on your plate.

The collecting phase is effectuated right after breeding, then half-farming followed by farming in open water, to bring the oysters to a market size and finally, the maturation phase in claires in salt marshes.

This culture is done all along the French coast, but note that Marennes-Oléron is the leading spat collection centre in France as well as the leading production and shipment centre for oysters in France.

The distinctiveness of the Marennes-Oléron oyster is the maturation in claires, which allow the change of the quality of the flesh, the taste of the terroir and the colour. The oyster becomes green due to an algae called navicule bleue, Haslea ostrearia.

This product has an excellent nutritional value because it comes from extensive farming without any external additives, in water of the highest quality free of pollutants. The oyster therefore feeds naturally by filtering planktons present in the ocean as well as in the claires.

Currently there are two species of oysters grown in France: the flat oyster Ostrea edulis and the cupped oysters Crassostrea gigas. But this has not always been so.

The flat oysters live in northern Europe, from Norway to France, to Denmark, the Netherlands, Belgium, Great Britain and Ireland. It can also be Found in Spain and Morocco.  Its presence extends into the Adriatic Sea and the Black Sea. Abundant on the coast of Europe in Quaternary and the Gallo-Roman era, Ostrea edulis is a native oyster of France namely the Marennes-Oléron area. The Romans use to take our oysters to Rome with them.

This Portuguese oyster was hit by two Epizooties (epidemic among animals) of viral origin: the “gill disease” from 1966 to 1970, followed by hemocyte viral disease from 1970 to 1973. The latter disease was accompanied by a mass mortality of the Portuguese and resulted in their disappearance from the French coastline. Faced with this disaster affecting about 5,000 oyster farmers, a quick solution was needed: a switch of species, hence the introduction of the Japanese oyster native of the Pacific, Crassostrea gigas.

The first transfer of these oysters appear to date from 1966. Done by an oyster farmer who was fascinated by the high growth rate and quality of the Crassostrea gigas, while the production of Crassostrea angulata was regressing. The first tests yielded good results, the oyster farmer decided to introduce other samples. But “The Scientific and Technical Institute of Maritime Fisheries” (ISTPM) proposed to stop this import of fear of contamination, which led to the outrage of the professionals involved. An expert visit to Japan was therefore organized in 1969 to examine the potential exploitation sites and the pathogenic risks, resulting in the introduction of this exotic species on the French coast.

The Japanese oyster is present in the sea of Okhotsk (Vladivostok) in Sakhalin Island (Russia), Japan, Korea and the Pacific coast of North America (from Alaska to California). This species has also been imported into Australia, Canada and in the Western countries.

The flat oyster has been affected since 1974 by two parasites (martelliose caused by Martellia refringens and Bonamiosis caused by Bonamia ostreae). This is why the production of flat oyster is on so very low scale, hence its high market value. Today, France mainly produces cupped oysters.

In France
The French oyster production sites are:

Area on the Atlantic Ocean, in Charente-Maritime (17).

The Marennes-Oléron basin
This shellfish production site on the Charente coast, south of the Charente River, is administered by the Marennes-Oléron maritime business district and managed by the Poitou-Charente Regional Section, Shellfish Regional Subsection (SRC) “Marennes Oléron “. The creation of this Section Poitou-Charente with two sub-sections: North Charente and Marennes Oléron date from September 2001.

The Marennes-Oléron pond is bordered to the north by the Charente estuary and the south by the pertuis de Maumusson, the sector Bonne Anse (near Coubre) exclusively reserved for collection is attached to it. The basin thus covers the banks of the Seudre Oléron island, coastal marshes of Brouage to Port des Barques and Ile Madame. The principal activity is oyster farming. The farming is practised on the foreshore (zones that become visible at low tide). Shipping is done from companies spread over the marshes.

The second activity is mussel farming whose farms are concentrated in Brouage.

For all consumer sales establishments, a health registration number is allocated by the veterinary services. Sanitary self-checks are mandatory to verify the state of the marketed products, by measuring the concentration of faecal coliform (bacteria). For Marennes-Oléron, the number of self-checks per establishment is proportional to the tonnage marketed.

The average depth of the basin does not exceed 10 m. Its water surface is about 150 km2 during high tides. The foreshore areas exposed during the highest tides have an approximate area of 100 km2. The breeding area has a surface of 32 km2. The maximum tidal range (height difference between high and low tide) is about 6.80 m and the average altitude is 3.40 m between the highest farms (which uncovers a tidal coefficient of 50-60) and the lowest parks (which is uncovered only at a stronger tidal coefficient of 115-120). The surface of the oyster farms on the public maritime domain is 2721.86 ha.

At the centre of the basin, on the part of the very flat coast, opens the Seudre estuary, contained as far as the eye can see in the grid claires and farmparks. This river, fully Charente, flows in a southeast, northwest direction. Its length is 70 km away. Two areas are distinctive: from its source to the tide-lock of Saujon: 45 km, draining a watershed of 404 km2 and the lock to the estuary: 25 km of brackish water (salinity less than 30 grams per liter), feeding the Seudre marshes depending on tides.

The island of Oléron, spindle-shaped of about 30 km from north to south, by 10 km east to west, is home to the Marennes-Oléron Basin, of onshore wind and swell.

The charente flows into the north of the basin, a river long of 380 km, which has a catchment area of 0,000 km2, spreading over three departments. 75% of the catchment area is used as agricultural land. Part of the old salt marshes have been cleaned and sometimes drained for agriculture.

The salt marsh located on private property, is particularly used in this basin for maturation and oysters greening.

The safety classification, of the production areas and the relaying areas, is determined for the non-burrowing bivalve molluscs (oysters and mussels) for the department of Charente Maritime in four zones (zoning).

The safety classification, of the production areas and the relaying areas, is determined for the non-burrowing bivalve molluscs (oysters and mussels) for the department of Charente Maritime in four zones (zoning). 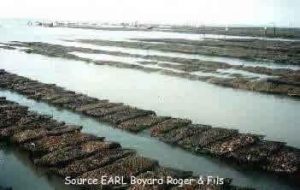 These are spots in the sea, accessible by boat only. Given their location and their respective depth, they are diversely uncovered depending on the tide coefficients.

These are the old salt marshes (formerly used to produce salt) that is now used for the maturation of oysters. These basins are dug in the ground, where the water is renewed according to the tides. 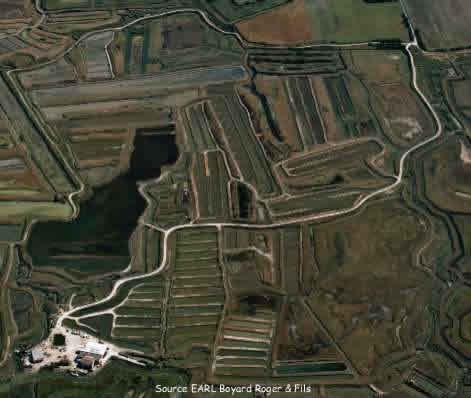 The farm and the marshes

The company, BOYARD, is located in the commune of Saint Just Luzac, the Marennes Township. It is surrounded by thirty acres of marsh used for the maturation of oysters.

When the oysters are brought from the parks, they are sorted and put in claires in the marshes surrounding the property. Depending on the needs and techniques, we obtain FINES DE CLAIRES, SPECIALS, POUSSES EN CLAIRES and FINES DE CLAIRES LABEL ROUGES.

Marennes-Oléron on the national scale

The economic activity in the Marennes-Oléron basin covers the breeding, farming and shipment of oysters. Many companies collect their own oysters. Some specialize in collection, half-farming, farming and maturation, and sell to shippers: they are called farmers. Others do the shipping themselves and are called shippers. For this, they must obtain a sanitary registration number.

At 1st July 1997, according to the Maritime Business Office of the Marennes district, 1577 license holders were registered. Among them, there were 818 759 farmers and shippers.

118 license holders have their registered office in another basin. They operate the Marennes-Oléron parks primarily for oyster and mussel collection.

On the private field, the farmed marshes, used for maturation is about 3000 ha; officially 1813 ha in water are recorded.

Regarding man power, depending on the time of embarkation / disembarkation, in 1996 The Maritime Business Office counted 600 employees under the MSA agricultural regime:

The age range, where farmers are the most numerous is that of 45-55 years.

No formal system of statistical data collection allows to have accurate information on the production and marketing. The Marennes-Oléron basin produces about 35,000 tonnes of oysters, added to another 30,000 tons matured in Marennes-Oléron, but farmed in other oyster centres. The estimated breeding stock in 1993 was at 95,000 tonnes (IFREMER).